Despite its abandonment by the game's writing, heresy and heretics are a concept full of potential that was never fully utilized in the story. This is why we exist, to give justice to a lore area that Square Enix did not, through connecting with and fostering heretic roleplays of all kinds via a discord server for heresy.

Whether it be the conventional heresy of the past, or the many forms it can take in the present, we are here for anyone who has an existing heretic character, is considering creating one, is interested in chatting about heresy, has a character wanting to be involved with heretics in some form, or even who has a character opposed to heretical activities and is seeking contacts to challenge. With heresy being as broad and scattered of a lore area and theme as it is, it is our hope to provide it some means of a place to grow and connect with others.

The discord is divided into two basic areas: heretics and other associates in general, and those of a specific sect created by the discord. If our original heresy setting interests you, please read on to the Roleplay Premise tab. Otherwise, you may skip to the middle of About The Setting.

As war rages on in Coerthas, the heretics are as unwavering and powerful as they have ever been, finally united under one banner and lurking in every shadow of the snowy wasteland the land has become. Standing at the center of this great wave of heresy are The Enlightened Ones, the largest and most powerful singular heretic camp in existence.

Their goal is simple- after all the bloodshed that has turned the soil red to its smallest particles, the war between man and dragon must end at any cost. And with Ishgard trapped in an inescapable web of lies with no hope of saving itself, it is up to The Enlightened Ones to bring in Ishgard’s inevitable downfall and subsequent salvation, create an age of peace once more, and finally see justice through for all the atrocities that have gone unpunished.

For all that has been built up, must eventually crumble to pieces and scatter like dust in the wind. 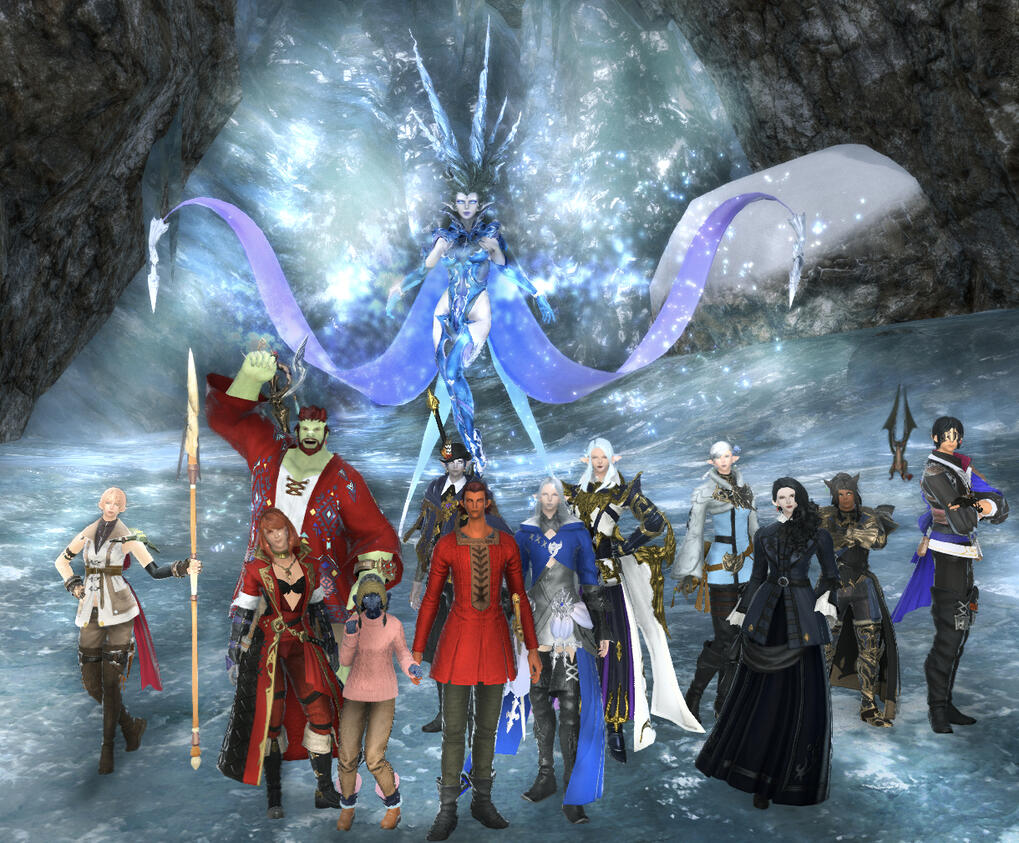 A photoshoot with our members.

Focuses and Themes: Emotional | War and Rebellion | Doomed Setting | Character Development | Dragons and Shapeshifting | Touches of void and other forbidden arts | Occasionally Violent and Dark | ARR and Heavensward eras, then expanding onward in the wake of the dust | Semi-lore compliant, semi-lore interpretive

The Enlightened Ones is a heretic themed roleplay story focused on the Shiva sect of heresy as is depicted in game, set between eight years spanning from years before A Realm Reborn to the end of the Dragonsong War. It follows the camp and its large spanning network of allies' adventures and efforts to save others from the tyranny of Ishgard, as well as each other, long before and after the Warriors of Light had anything to do with it.

Discarded and torn apart by Ishgard through various means and made to be outcasts, the individual members all find solace and purpose through the camp and its mission to save Ishgard, even despite all of their differing motivations and views on its ultimate fate.

The setting features its own unique location and its own take on heretic lore, fleshing it out and discarding some of it in order to bring it to a level viable for roleplay. In addition, we also have our own set of headcanons on Dragon’s Blood, as a way to allow anyone who may otherwise be intimidated by the lore’s confusing and often contradictory rules to find a starting point for crafting a character with it.

A size chart of dragons existing in the game created by one of our members to help with visualizing dragon forms.

Beyond the story itself, we are a collection of friends who are exploring heresy as a viable lore area with our own take and enjoying ourselves as we watch our characters develop. Roleplay is casual and at your own pace with no set levels of commitment and activity.

If the story interests you, please check out its official lore document for more information and further instructions on how to participate. And if not, we also have other avenues:

General roleplay and connections with other heretics of all kinds. Heresy comes in all shapes and sizes, and lives on in the souls of people beyond the war, if not in their actions as well. If you have a heretic of any kind, we would love to be able to connect them with fellow heretics.

For those who oppose our kind and our message. Do you have a character who fought against heretics or was otherwise involved with or wronged by them? Have you ever wanted to roleplay them in their struggles against heretics? We would love to offer ours as an opposing force to them, or as a chip on someone's shoulder they are wont to take revenge or otherwise hold a grudge against.

What need have you for our kind? Do you simply have a character who has any other sort of connection or reason to seek out heretical contacts? Then we are a resource for finding said contacts.

How To Get Involved

If you would like to join the discord, either send a DM on Tumblr to crimsonfluidessence or send a friend request to Plat#7378, introduce yourself, and she will give you the link. Note however that individuals are subject to being talked to a little first before the link is given, and if ever necessary, we reserve the right to withold it from anyone whose behavior may be a concern to the chat's social well-being.
No need to have an existing heretic of any kind or any elaborate ideas for one, if you are at least interested in discussing the topic or have a character related to it, all are welcomed.
Here is a quick preview of the server layout: 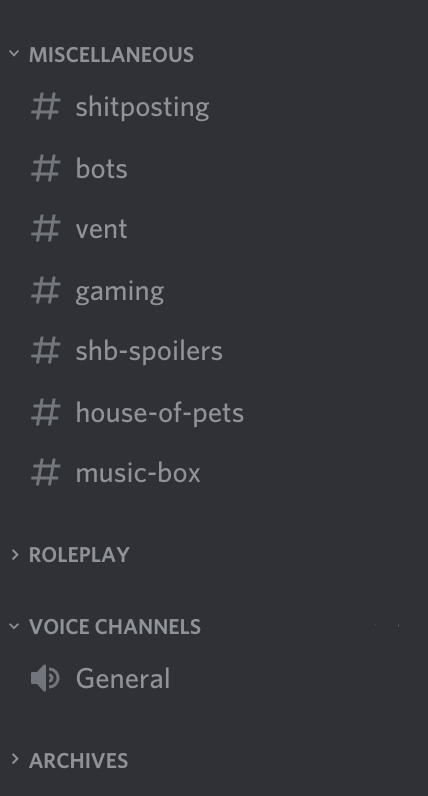 There are no sorts of activity checks or pressure to talk or anything of the sort. The server is simply a place kept relaxed and safe for conversation, whether it does or does not relate to heresy. Please contact Plat if you have any further questions, and if you do decide to sell your soul to heresy, we hope to see you there!